New book: Locating Nordic Noir: From Beck to The Bridge

This book, written by Kim Toft Hansen and Anne Marit Waade (AAU), has just been published. 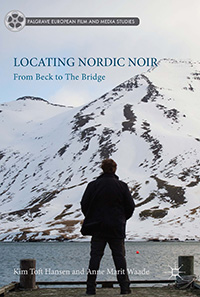 The book was published in connection with the research project ‘What Makes Danish TV Drama Series Travel?’, and the book answers this very question, “Nordic Noir did!”

The publisher describes the book as follows: ”This book is a comprehensive study of Nordic Noir television drama from the 1990’s until today. The authors introduce the history of contemporary Nordic Noir from the perspective of place, production and location studies. The chapters include readings of well-known television crime dramas such as Beck, The Killing, Trapped and The Bridge as well as a range of other important Nordic Noir cases. The authors position the development of Nordic Noir in the global market for popular television drama and place the international attention towards Nordic crime dramas within regional development of drama production in Sweden, Denmark, Norway and Iceland. Consequently, Nordic Noir is read as both a transnational financial and creative phenomenon and as a local possibility for community building. Offering a comprehensible, scholarly and methodologically original approach to the popularity of Nordic television crime dramas, this volume is aimed at readers with an interest in crime drama as well as scholars and students of television drama.”

The book was launched on 28 September at the conference held in Aarhus Landscapes in television drama med en ’terroir beer tasting’.

Can be purchased here.

► Read more about The Interdisciplinary Research Group in Culture (IRGIC)

►  Read more about the research group on Interdisciplinary Media Studies

► Read more about Department of Culture and Global Studies